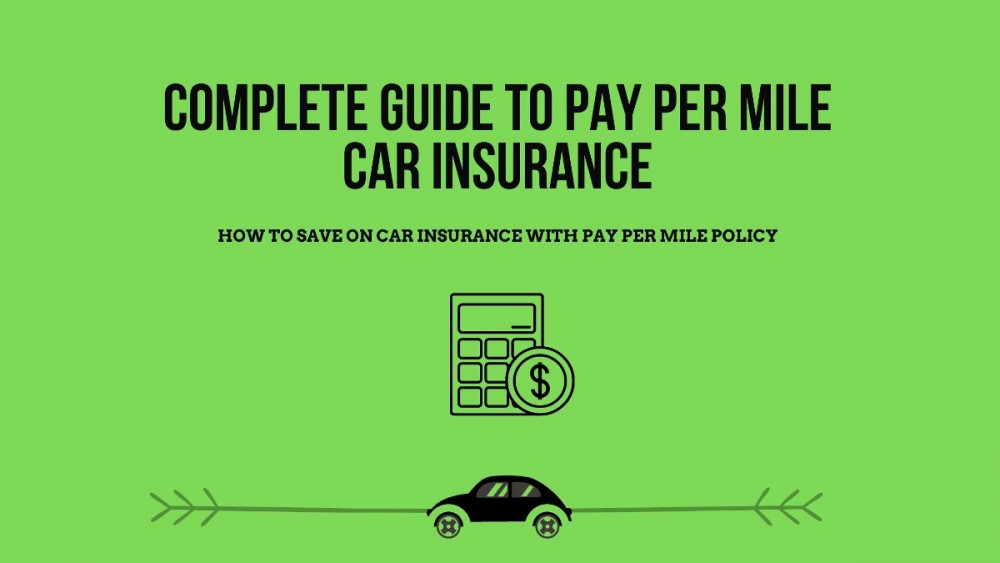 Insurance is one of the most significant costs of motoring. According to data obtained from S&P Global Market Intelligence, vehicle cover costs the average US driver $1,348 per year - that's more than $112 per month!

Those who only use their cars infrequently lose out under the current system. Even though they pose a low risk, they must pay the same as everyone else, subsidizing other motorists.

Fortunately, a type of cover called pay per mile insurance offers a solution. While most insurance products lock you into generic monthly contracts, some alternatives calculate your premiums based on how many miles you travel. If you only drive a few miles every month, you could save a fortune versus conventional insurance and stay road-legal to boot!

What is pay per mile car insurance?

How does it work?

Who is eligible for pay per mile car insurance?

How much can you save with pay per mile car insurance?

How to get pay per mile car insurance?

What is pay per mile car insurance?

Pay per mile car insurance is a particular type of cover in which premiums adjust according to the number of miles traveled. For instance, a person who drives one hundred miles per month will pay significantly lower premiums than someone who travels a thousand miles over the same period.

For low-mileage drivers, the benefits are obvious. You get to use your car on the road any time you like, but you're not sucked into an insurance system trying to cover risks for the average driver. You're no longer subsidizing everyone else by paying large premiums that don't correspond to the threat you pose.

How does it work?

Insurers calculate traditional insurance premiums by collecting information about driver characteristics and then feeding that into an actuarial model. Young drivers who have only recently passed their tests, for instance, pose a much higher risk than people who have been driving for twenty years, so they pay higher premiums. Likewise, residents of crime-ridden inner cities face higher monthly fees than those living in the suburbs because of the higher likelihood of theft.

More control on what you pay

Pay per mile insurance provides you with the same cover as a regular insurance, including comprehensive coverage, liability cover, and uninsured motorist coverage. But you get more control because you only pay for the miles you consume. While traditional factors play a role, the lion's share of your monthly fee is based on how far you drive. The greater the distance you travel, the greater the risk and, therefore, the higher the premium.

Of course, the marginal cost of each insurance mile varies from person to person (and insurer to insurer). That's because every motorist has a set of characteristics that determine the likelihood that they will have an accident for any given mile that they drive. A 21-year-old with a DUI history driving a supercar is much more likely to crash per mile than a middle-aged professional with a family. Insurers adjust the price per mile that the person pays according to these characteristics. For instance, the young driver might have to pay 10 cents for every mile, while the older driver only pays 3 cents.

You pay a fixed monthly base in any pay per mile policy - perhaps $30 - plus a variable component. This base portion of your bill covers risks insurers face that don't vary with the number of miles you drive (such as somebody stealing your car from your driveway while parked at home). The variable portion captures all the risks that do depend on the number of miles you travel. Adding the base plus the variable parts together yields your total monthly bill.

From this simple example, you can see the kinds of savings on the table. While the average traditionally insured motorist pays $112 in monthly premiums, you're getting all the cover you need for a fraction of that price.

Who is eligible for pay per mile car insurance?

Whether you are eligible for pay per mile car insurance depends on the area in which you live.

Most drivers living in the mainland US can find at least one pay per mile car insurance companies operating in their state - and sometimes several.

How much can you save with pay per mile car insurance?

Traditional insurance policies offer "low mileage discounts," which cut the price of monthly premiums for those who don't drive much. To qualify, drivers have to travel less than 5,000 to 10,000 miles per year. According to data from iDrive Safely, they typically save 3 and 20 percent on their premiums every year.

Cynics argue that this factor undermines the basis for pay per mile car insurance. But interestingly, pay per mile cover still works out cheaper for those with the lowest mileage.

Metromile, for instance, says that the average driver on its scheme who drives 6,000 miles per year saves an incredible $741. According to the insurer, if you only travel 2,500 miles over twelve months, you can net savings of $947. Even people driving 10,000 miles can save substantially via the company's scheme. Mileauto advertises that pay-per-mile drivers can save between 30 and 40 percent off their current rates, on average.

Please note that the price you pay per mile is subject to change when you renew your agreement with the insurer. It could go up as well as down, depending on your underlying characteristics and perceived level of risk.

When to switch to pay per mile?

Particular segments of the motoring public stand to benefit from pay per mile car insurance more than others. For instance, those who take public transport to work and only use their cars for recreation at the weekend stand a much better chance of saving. Those with car leases with tight mileage restrictions may stand to gain too. If you have a second car sitting in your garage that you barely use, you may also benefit. Furthermore, if you've been furloughed from work or are now doing your job remotely, switching to a pay per mile scheme could help you save.

Even if you commute to work every day, pay per mile car insurance could still be the best option for you. Remember, insurers calculate premiums based on the number of miles you travel, not how long you spend in your vehicle. So, if you spend two hours per day driving one mile to your place of work and one mile back again, you could still save money since you're only traveling a couple of miles per day.

Traditionally insurers were historically reluctant to introduce pay per mile car insurance policies, but now the floodgates are opening, and several companies are already in the market. As discussed, five companies offer motorists this type of cover, but they are different from each other in significant ways. Which is the best depends very much on the features you'd like your policy to offer.

The biggest difference between these companies is where they operate. You can only get insurance from pay per mile providers that operate in your area.

Mile Auto is currently available in Georgia, Illinois, and Oregon [September 2020] and planning to expand to additional states. You can sign up to receive automatic email notifications if the company launches in your area.

Another point of difference are the so-called "road trip exceptions." The idea here to cap your daily mileage charge for days where you do a lot of traveling. So, for instance, with Nationwide, only the first 250 miles count in a twenty-four hour period. The same goes for Metromile for all states where it operates (except New Jersey where the limit is 150 miles). This feature means that you can hop in the car for a long drive and not have to worry about your monthly bill going through the roof, so long as you complete your trip in a single day (otherwise, insurers will reset the counter).

The majority of pay per mile insurers operate their services via apps that link to your vehicle and track your location. Liberty Mutual uses the ByMile app. Metromile has its own branded app that does something similar.

Nationwide SmartMiles requires you to install a device into your car. You plug it in according to the company's instructions, and it'll track the number of miles you do on any given day. This system is very similar to a traditional insurance company black box that monitors how you drive. Through this setup, Nationwide can offer a "safe driver discount" of 10 percent that the company will apply after your first renewal. Thus, the benefit of this option is the extra savings you can make. The downside is a slight loss of privacy.

Mileauto's system is even simpler. You just take a snap of your vehicle's odometer every month, send it to them, and they'll use it to calculate your insurance premium. Some drivers who want privacy and don't want their insurer tracking their every move might prefer this option.

There are also differences in these companies' ability to recover stolen vehicles. Metro mile, for instance, advertises a 92 percent stolen car return rate.

In general, most vendors make it easy for you to access policy details and the number of miles you've driven in any given month. Nationwide, for instance, provides customers with an online portal where they can check their current usage. Others, such as Liberty Mutual and Metromile do it all through their apps.

How to get pay per mile car insurance?

Signing up for pay per mile car insurance is relatively easy, although there are differences between vendors.